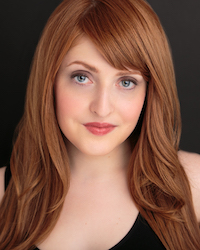 Originally from Milwaukee, Wisconsin, Jeanette Minson has always had a passion for music, theater, and dance. After making her professional stage debut as a child in the RADIO CITY ROCKETS CHRISTMAS SPECTACULAR (Chicago), she was hooked.

Jeanette holds a BFA with honors in Drama from NYU Tisch School of the Arts. At NYU, she was recipient of both the Founders' Day Award for Academic Achievement and the Outstanding Achievement in Studio Award. Immediately upon graduation, Jeanette was named one of Broadway’s Rising Stars and made her Town Hall concert debut. She has appeared both on camera and on the stage in NYC and around the country at places like The Public Theater, Lincoln Center, Barrington Stage, and Goodspeed to name a few.

In addition to playing pretend, Jeanette Minson is a MSW candidate at Columbia University, pursuing a career in mental health counseling for creatives as a therapist.